One of the surprises I’ve had from the rapid work from home switch is how bright my home office is on a sunny day and how dark it is on a cloudy day. I regularly have to switch my interface mode to be able to see my screen and continue working.

My regular tooling is:

Removing the tools that already have adaptive interfaces I was left with the following needs:

Xcode is a bit tricky. Nothing needs to be set up, but the way that theming works is not directly obvious. By default, Xcode will automatically adjust the navigation items, toolbars, etc. when switching the system theme, but the source editor will stay on the previously selected theme.

Out of the box, Xcode includes Default (Light) and Default (Dark). The naming has no impact on the response to the interface mode. The only thing that matters is the theme selected when in a given mode.

To configure Xcode, set the system theme to dark, and then pick a theme. Toggle to light, and then pick another theme. Those two themes will be automatically used for light and dark mode now.

ex: picking Default (Light) while in dark mode, and Default (Dark) while in light mode would make the UI and editor styles opposite.

The way that the theme is linked to the current system theme is not immediately obvious.

iTerm can be extended using Python scripting after the Python runtime is installed.

I’m using a script from FradSer to manage this. The process is pretty simple.

The script is attaching a monitor to the iTerm effectiveTheme variable and is automatically updating the profile in response to a variable change.

TextMate is an unsolved problem. I have not yet found a way to dynamically update the theme. The priority here is lower with my daily notes in Day One, but it would still be nice to have given I use it as a scratchpad for terminal commands as well.

macOS Automator applications automatically show up in Spotlight search and are a great way to manage system automation. I started with a simple automation to toggle the system appearance. This Change System Appearance > Toggle Light/Dark action is available be default.

By naming it Toggle Light or Dark Mode, Light Mode, Dark Mode, and Toggle Mode are all valid name matches. Although I use it enough that T is all that I need to type.

I can simply type “⌘ + Space, T, Enter” to toggle my system interface.

Wallpaper automation is a bit broken. AppleScript (theoretically) supports iterating over desktops and supporting setting wallpapers, but when iterating over “every desktop”, the results are significantly less than you might expect. 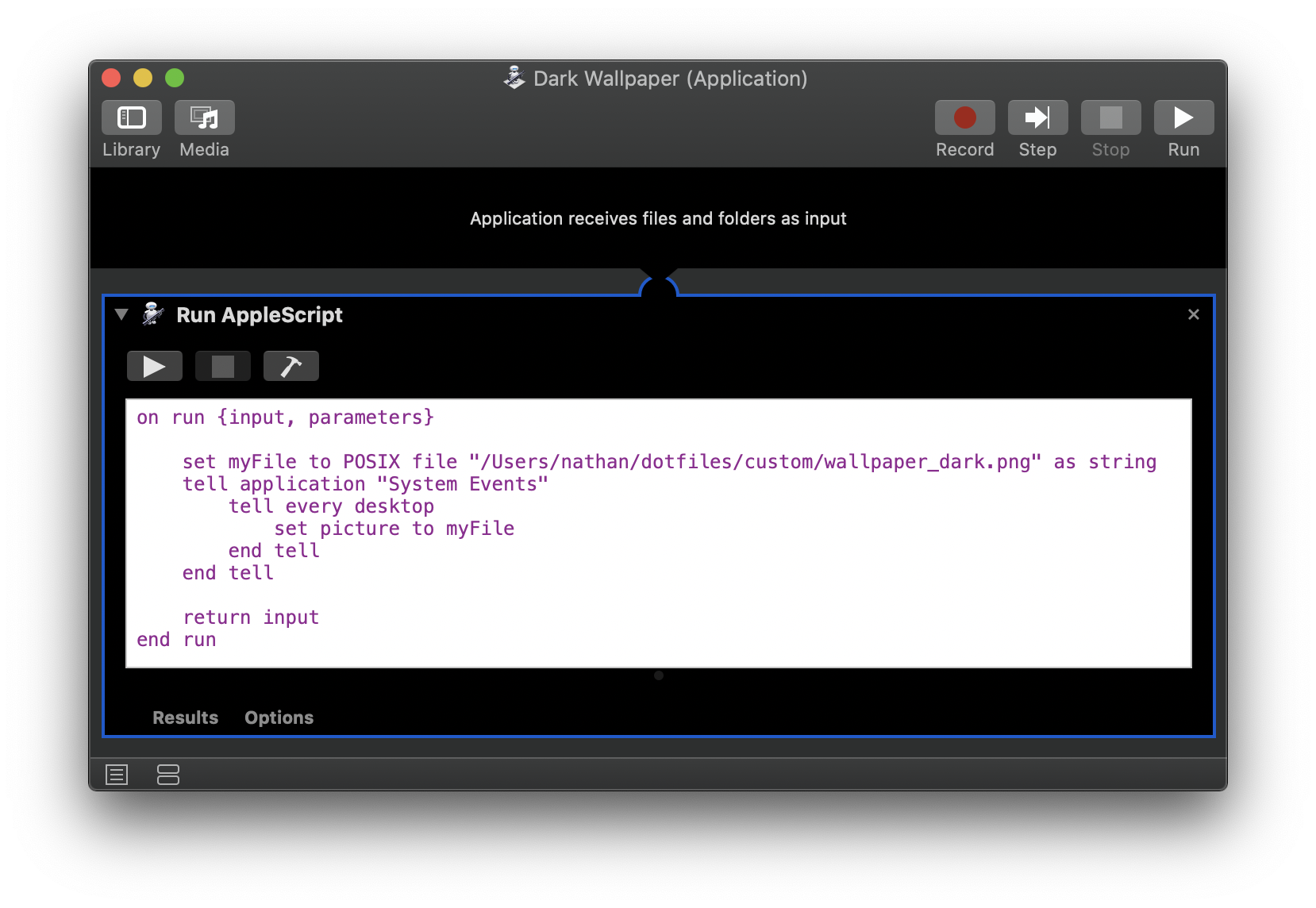 That AppleScript says tell every desktop, but only sets the desktop/space that the user is currently looking at. This is probably a privacy feature as these commands used to work.

To add the two wallpaper actions, make a new Automator Application with a single “Run AppleScript” that sets the path to either the light or the dark wallpaper. This enables:

Note: All the automations must be run within Automator and allowed through the OS security rules before they will work in Spotlight.

Instead of navigating through layers of GUIs, I now have three main keyboard shortcuts that allow for instant reconfiguration.

This is a massive win for my productivity and happiness in my workspace.