In August 2018 I started building a time tracking app that I’ve been calling Time (creative name, I know). The goal of this project is to build an engine that I can use to answer questions such as:

While getting started on this project, the main motivation to build it myself over using an existing tool was the fact that all of the tools out there were really based around consulting and expense reports. A time tracking app based around simple curiosity and clear data didn’t really exist.

I also wanted to make sure that the data was easy to archive and stored in such a way that would allow it to last. I didn’t want an iOS update to mean that I would lose access to years of information.

It has now been over two years since I started this project. I’ve worked on it off and on with a few other major projects and life changes along the way. In 2019, I designed and built a macropad and redesigned this website. In early 2020 my wife and I purchased our first home just before the world shut down for COVID-19. From the beginning of COVID through May/June I was building a telemedicine platform for SkinIO with the goal of pivoting and saving the company.

Long story short, there was some stuff going on.

Aug. 2nd was the last day I tracked in both Time and Tyme, and when I decided to fully commit to the new platform that I am building. I had just wrapped up a major styling update that I had started on Feb. 22nd (right before the world changed), and the app was finally complete enough that I could use it to track my daily and weekly time.

I keep all of my notes for side projects in a moleskin notebook. I think that for the same reasons that I’m fascinated by time and how it’s spent, I have some romantic or nostalgic ideas about hand written project notes.

It’s not about the idea that my notes or projects are great or world changing; it’s more about the diary that’s formed. I can look back through this notebook and see the sketches and mappings from when I was building an app to propose to my now wife and the early ideas of what this project would become.

In June 2019 I made a list of what was needed to start using the app daily: 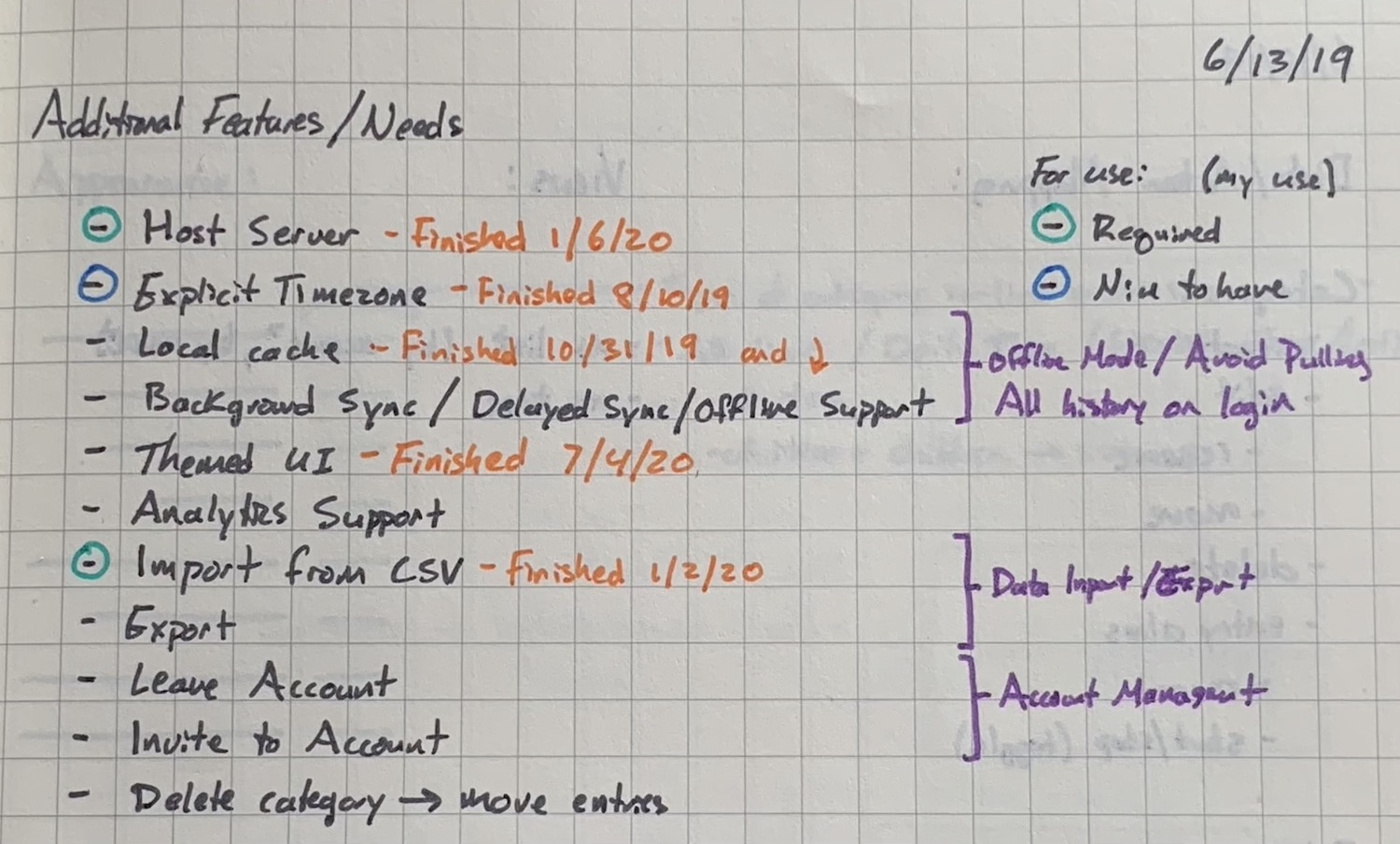 The critical items there have all been marked off. The app is themed, a server is hosted that I’m using daily, and it’s tracking the timezone data and adjusting both for event time and local/relative comparison.

As far as a “daily tracker” is concerned, this app meets all of the goals I set out with and is in a tighter and cleaner form factor.

What’s next is to finally answer my initial questions of how much am I working? and where do I spend my time?

I have data from every working minute of 2018, 2019 and 2020 that has never been analyzed. I started tracking my time in 2016 to make sure that I wasn’t working on Uplink so much that it was taking away from my work at SkinIO.

When I look back at my GitHub activity graph from the last three years, I can see the days that I committed work, but it doesn’t show me the time I spent thinking and sketching, or iterating on items that never made it into a final commit. It doesn’t show my time learning to play the piano.

I used to have the goal of one commit per day, but that goal orients activity and time around producing some output instead of just intentionality of time. I want to look back and say “I prioritized my family, my friends, my hobbies and my work, and each was done with intentionality.” I don’t want to just force items into a messy commit history.

My next task on this project is to rebuild the GitHub activity graph using my self-reported data. I want to control the input, the output, and the narrative so that this is a tool for self-reflection and accountability and not just a graph of someone else’s metric.

If someone wants to graph the actual time spent on a project, let them. If they want to graph the days that some work occurred, that is just as viable.

I am working to build a habit tracker, a time tracker, and a whole engine for comparison and analysis of data. When it’s done, I will be able to look back and clearly answer the questions I posed two years ago. When I make a conscious effort to work less, or work more responsibly, I want to know if it’s actually changing or if I’ve just normalized longer hours.

This post is the first in a series about my Time project.